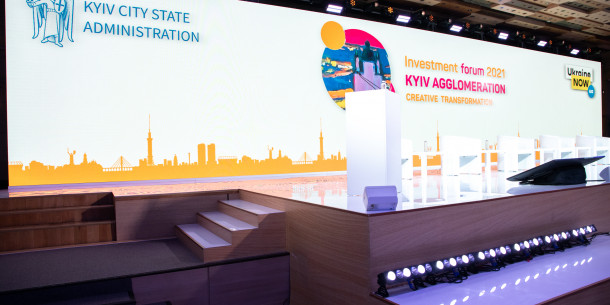 Kyiv City Investment Forum-2021: the time has come for the creative transformation of Greater Kyiv

The Kyiv Investment Forum took place in the capital. During the event, international and Ukrainian investors, representatives of local governments, municipalities of European and Asian cities, experts on sustainable development and health, urban planners and artists discussed issues of creative transformation and new opportunities for investment-attractive industries.

The forum was opened by Mayor Vitali Klitschko.

"Investment is one of the locomotives of the city's development. Almost 60% of the state's income comes from Kyiv. Our task is to interest every investor so that he has the opportunity to implement their projects and opportunities. We have many plans, interesting and promising projects in which it is profitable to invest. Kyiv is open to business initiatives that help the capital develop dynamically. Therefore - join! Multiply the beauty and comfort of European Kyiv and increase your success! ” - Vitali Klitschko addressed the forum participants.

The Forum was also attended by the Mayor of Baku Eldar Azizov, the Mayor of Chisinau Ion Cheban, the City Manager of the City Hall of Podgorica Maryan Yunchai and the Deputy Mayor of Krakow for Sustainable Development Jerzy Muzyk.

They noted four components for successfully attracting investment in municipal projects: a stable and efficient city government, the desire to invest in the business, human capital, quality and convenience of life in the city.

As part of the discussion on the prospects of establishing a municipal bank, Serhiy Kruhlyk, Kyiv City Mayor's financial and investment adviser, expressed confidence that such an institution could become an effective financial tool for controlling the city's funds and accumulate significant funds for important projects.

During the Forum, experts from different countries presented successful projects of successful urban transformations, including the creation of an urban forest in Madrid, the revitalization of Eindhoven's industrial zones, the development of an abandoned area around Podgorica Airport and many others.

The environmental challenges facing Greater Kyiv, the search for growth points for environmental investment and the necessary steps to return the Ukrainian capital to one of the greenest cities in Europe were the top topics of the panel discussion: "Adapting to climate change: rapid urban development and environmental protection".

"The air quality monitoring system implemented by Kyiv will allow monitoring air quality online and quickly take measures to inform residents and rectify the situation. After all, Kyiv is the people, and the air is their health, ”Denis Moskal said.

Experts called the projects on energy efficiency and energy modernization the most promising for Kyiv, emphasizing the importance of raising the level of eco-awareness of the residents of the capital agglomeration.

"Careful and responsible treatment of the city by the authorities is the key to improving the quality of life of citizens and increasing the attractiveness of private investors," said Sylvia Villacañas Beades, head of the strategic planning department of the Madrid City Council.

The COVID-19 pandemic has led to a different assessment of the importance of moral and physical health, the level of immunization of the population, and the stability of the health care system. During the discussion panel "Sustainable Community Health", the speakers discussed the priority areas of sustainable health, which are taken care of by the Kyiv city authorities, international experience in this field, which are "healthy cities", as well as the role of new sports locations in health. Kyiv and the importance of protecting yourself from stress.

"Health is a top priority for the city government. And this is understandable because 34% of Kyiv residents consider health care to be a higher priority than housing and communal services, roads and public transport, ”said Olena Govorova, Deputy Head of the Kyiv City State Administration for Self-Government Powers.

The role of creative industries in shaping the economic well-being of the modern city, the main trends of their development, success factors and ways to increase competitiveness were discussed by participants of the discussion panel "Creative Transformation: Codes of a New Reality".

The founder of DMT BROS, an expert on global brands Chang Su said that the city's branding is based on long-term development. It is, in particular, about the history of the city and the promotion of values.

"Kyiv has its own ready-made culinary brand" Cutlet in Kyiv style ", it should be promoted and popularized in the world, because culinary identity is an important component of the overall image of the city and the state," said Yuri Kovryzhenko, chef, gastronomist and ambassador of Ukrainian cuisine.