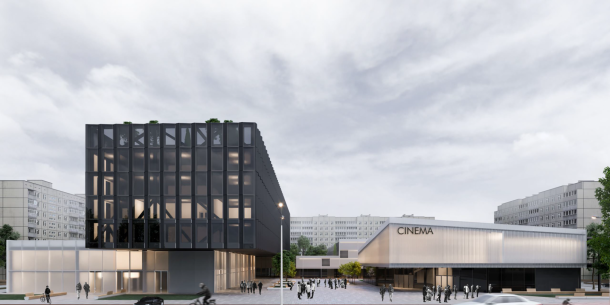 An investor is planned to be involved in the construction of a public facility with a modern cultural space.

Deputies of the Kyiv City Council supported the draft decision, which allows starting preparations for the investment tender to the construction of a public facility on 116 Holosiivskyi Avenue. The corresponding decision was supported by 79 deputies.

Currently, the Zagreb Cinema is located at 116 Holosiivskyi Avenue. Object with an area of 2.5 thousand square meters, was built in 1989. The premises of the cinema have not been used since 2018 due to the unsatisfactory condition of structures, utilities and interior design. The building is on the balance of Municipal Enterprise "Kyivkinofilm" on the right of economic management and is not included in the Program of privatization of communal property of the Kyiv territorial community.

Demolition of the object is possible only after determining the winner of the investment tender, concluding an investment agreement with him and compensation by the investor of the value of buildings and structures to be demolished.

According to the preliminary pre-project proposals, on a 1.3-hectare plot of land will be located - cinema or other communal facilities in the cultural sphere, a parking lot and rented premises. The estimated construction budget is UAH 510 million.

According to the Department of Economy and Investment of the Kyiv City State Administration, the investor is obliged to transfer to the communal property of the Kyiv territorial community a part of the investment object (newly built premises) with an area not less than the existing one.

As a result of the investment competition, the city will receive newly built modern cultural premises with an area of at least 2.5 thousand square meters.