UA
+38 (044) 2021319
Mon - Fri: 9.00 - 18.00
Main > City News > Kyiv will receive a €70 million loan for projects to modernize the water supply systems
City News
15
JUL
The Australian government canceled the customs duty on some Ukrainian goods
13
JUL
The government has introduced grant programs to support entrepreneurship and create new jobs
24
JUN
The Kyiv City Council approved the guarantee agreement and the loan agreement with the EBRD
15
JUN
Vitaliy Klitschko: Kyiv is fulfilling its commitments
24
MAY
In Davos, Vitaliy Klitschko spoke about economic aid to Ukraine and Kyiv
23
MAY
Vitaliy Klitschko took part in the opening of the World Economic Forum in Davos.
18
FEB
Deputies of the Kyiv City Council gave permission for the reconstruction of the entrance group of Alexandrivska Hospital
30
DEC
Kyiv rose by 16 points and entered the top 100 smart cities in the world
View all 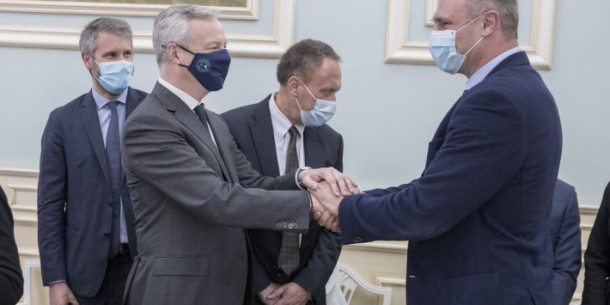 Kyiv will receive a loan from the French government of €70 million for projects to modernize the capital's water supply systems. This was stated by Kyiv Mayor Vitaliy Klitschko after a meeting with French Minister of Economy and Finance Bruno Le Maire.

"I would like to thank once again the Government of France and you, Mr. Minister, for your help in implementing the project to modernize the water supply system in Kyiv. This project is very important for the residents of our city. After all, clean water is human health, the mayor said. - We are interested in developing cooperation with the French partners in the implementation of infrastructure and other economic projects in Kyiv. So that the capital of Ukraine by all indicators becomes a modern, dynamic city with European living standards. In particular, in the modernization of urban water management, consisting of about 4,200 kilometers of networks. And it's very nice that the Governments of Ukraine and France have reached an agreement on granting Kyiv a soft loan of €70 million for a period of 40 years. These funds will be used for projects to modernize the capital's water supply systems".

According to him, the city authorities seek to invest in the renovation of infrastructure not only the budgetary funds but also funds from international financial institutions. Together with Kyivvodokanal, the city considered the possibility of attracting a favorable loan for Kyiv.

"We are very happy for such cooperation. Because all these projects will be aimed primarily at improving the quality of life of the residents of your beautiful city. Our delegation also includes specialists from leading companies with extensive experience in the field of water supply and sewerage. And they are ready to share this experience," said the Minister of Economy and Finance f the French Republic.

In particular, we are talking about several key projects for Kyiv:

- Introduction of water hammer prevention technology at Dniprovska and Desnianska water supply stations. Accidents often occur at these stations due to long-term operation and wear of equipment and networks.

- Introduction of washing water treatment technology at Desnyanska water supply station. The project is a priority for implementation until 2022, in the framework of preventing the discharge of wash water into the Dnieper River after water treatment. - This is one of the main environmental problems of the capital, which has not been solved for decades.

- Reconstruction of two water pipelines from the Desnyanska water supply station of the second rise to the existing chambers in the area of Naberezhne Highway with a water loss control system. They provide water to the central part of the city.

"Kyiv is open to business people from France. And is the most attractive city for investment in Ukraine. The city authorities are doing everything to create a favorable business climate in the capital of Ukraine. I am convinced that the implementation of large investment projects is an important factor for the development of relations between our countries and will give them additional impetus," said Vitaliy Klitschko.