UA
+38 (044) 2021319
Mon - Fri: 9.00 - 18.00
Main > City News > For the first time, Kyiv was included in the international ranking of Global cities: new priorities for a new world
City News
09
APR
Kyiv City Council has expanded benefits and preferences for small and medium-sized businesses affected by the pandemic
24
MAR
Vitaliy Klitschko met with the EBRD delegation
12
MAR
Training at the "School of Exporters" can be done online
01
MAR
EBRD and “Kyivsky Metropolitan” have signed a 50 million euros loan agreement for the purchase of metro cars
26
FEB
The Smart Building forum will take place in Kyiv
25
FEB
Kyiv is preparing for the 2021 Investment Forum
16
FEB
Entrepreneurs and business technologists are invited to the training program
09
FEB
2021 Greater Bay Area international High-End Food and Beverage Expo
View all 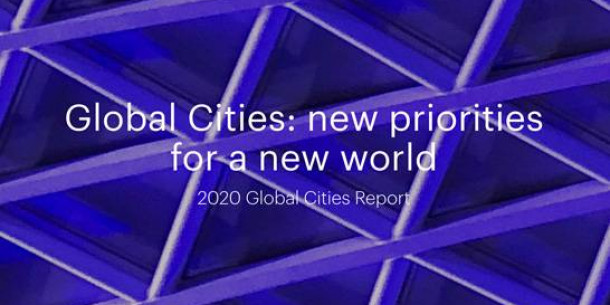 For the first time, Kyiv was included in the international ranking of Global cities: new priorities for a new world

The international ranking "Global cities: new priorities for a new world" 2020 Global Cities Report for the first time included the city of Kyiv in the publications "Global Cities Index" (GCI) and "Global Cities Outlook" (GCO). The capital city took 89th and 94th positions among 151 cities of the world. This was reported by the Department of Economics and Investments of the Kyiv City State Administration, citing the official publication of the ranking.

The compilers of the ranking analyzed the socio-economic situation in Kyiv at the time of entering the state of struggle against the spread of the COVID-19 pandemic and the prospects for the recovery of the city's economy in a changing world.

As part of the publication, analysts also noted the main consequences of the pandemic in large cities and outlined a number of trends and challenges that mayors will have to overcome. The authors of the ranking suggest paying special attention to three vital areas in which it is necessary to move the innovation process: economy, social policy and culture.

In particular, it is a matter of maintaining the competitiveness, first of all, of those businesses that create added value, contribute to sustainability, justice and create social value. In addition, in the context of broken international supply chains, it is necessary to find resources to support them and focus efforts on revitalizing and expanding long-distance connections. The urban space must also undergo transformations. It is necessary to reimagine the planning of the city and provide for compliance with the conditions of social distancing, addressing environmental safety and ensuring the inclusiveness of the urban environment and services.

The international ranking of consulting group A.T. Kearney, Inc. is published for the tenth year. In 2019 the compilers analyzed the indicators of 130 cities around the world.