UA
+38 (044) 2021319
Mon - Fri: 9.00 - 18.00
Main > City News > Ukraine has improved its position by 7 points in the Doing Business-2020 ranking and has been ranked 64th among 190 countries
City News
20
FEB
Kyiv's investment opportunities are going to be presented at global economic and investment venues in 2020
18
FEB
The selection of candidates to receive the Dubai International Best Practices Award for Sustainable Development has begun
12
FEB
​A sports grounds will be arranged in Sputnik park in Kyiv
11
FEB
Preparations for Kyiv`s Investment Forum-2020 have begun
28
JAN
The winner of the investment competition for the area of active entertainment in the Victory Park has been determined
21
JAN
Yuriy Nazarov: "In four years Kyiv has succeed in becoming one among 100 most intelligent cities in the world"
09
JAN
Kyiv prepares for participation in the International Real Estate Exhibition "MIPIM-2020"
20
DEC
Kyiv has decided on its own smart specialization
View all 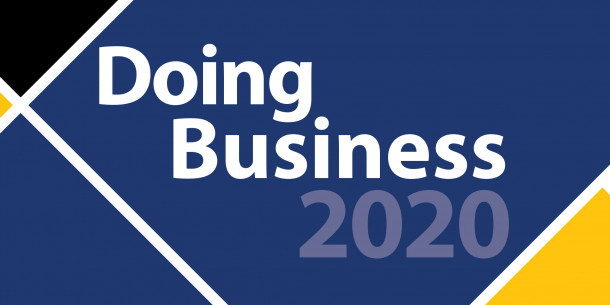 Ukraine has improved its position by 7 points and has been ranked 64th out of 190 countries in the Doing Business-2020 investment attractiveness rating, published annually by the World Bank. That was announced by the Prime Minister of Ukraine Oleksiy Honcharuk.

“Raising Ukraine's ranking in Doing Business-2020 by 7 points at once is a result that speaks for itself. This is a positive signal for Ukrainian entrepreneurs and a "green light" for foreign investors. However, this is only the beginning, and we continue to work in this direction: three days ago the Bankruptcy Code has been launched, a few weeks ago - the law on stimulating investment activity, activating the process of deregulation”, comments Prime Minister of Ukraine Oleksiy Honcharuk.

According to the World Bank report, Ukraine has improved its performance this year by 6 out of 10 indicators taken into account by World Bank experts in rating.

Ukraine has shown the greatest progress in the Minority Shareholder Protection component +27 points through the opening of information on final beneficiaries and the Building Permit Component + 10 points by eliminating the requirements for hiring an independent designer and engineer, submitting notifications online and reducing the cost of building permits within Kyiv.

In addition, the ranking was influenced by positive changes in the following components: "Connection to electricity networks", "International trade", "Property registration" and "Access to credit".

The Doing Business rating is the World Bank's annual investment attractiveness rating of 190 countries. The Doing Business report compiles a comprehensive survey of the state of reform in each country, using 10 key indicators used to analyze economic performance and identify successful reforms and evaluate their effectiveness. Ease of Doing Business Index is an important indicator for investors when deciding to invest in a country of the world.