UA
+38 (044) 2021319
Mon - Fri: 9.00 - 18.00
Main > City News > Vitaliy Klitschko: We will allocate 140 million euros for the modernization of the capital's heat and power complex
City News
22
OCT
Vitali Klitschko at a meeting with representatives of the World Bank discussed "Kyiv Urban Mobility"
20
OCT
Cooperation with Denmark on modernization of the capital's water and heat supply systems was discussed in Kyiv
08
OCT
A concert hall and a choral arts center to be built on the site of the emergency building of the municipal cultural institution
29
SEP
A modern residential complex in the Shevchenkivskyi district will be built at the expense of the investor
27
SEP
An investor is planned to be involved in the construction of a public facility with a modern cultural space.
23
SEP
Vitaliy Klitschko held an online meeting with EBRD experts and the ATKINS consulting team
14
SEP
Kyiv City Investment Forum-2021: the time has come for the creative transformation of Greater Kyiv
10
SEP
Kyiv and Krakow have shown the effectiveness of long-term partnership
View all 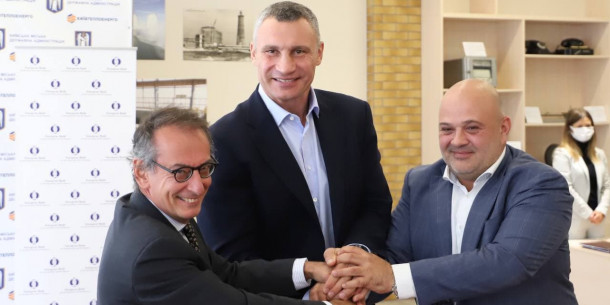 Vitaliy Klitschko: We will allocate 140 million euros for the modernization of the capital's heat and power complex

The city will direct 140 million euros in credit funds for the modernization of the capital's heat and power complex. This was stated by Kyiv Mayor Vitaliy Klitschko during the signing of a Loan Agreement with the European Bank for Reconstruction and Development and a Guarantee Agreement.

According to the Mayor, this project will allow the introduction of modern technologies in the renovation of the district heating system in Kyiv, which is one of the three largest in Europe.

"Implementation of the program will help to increase energy efficiency and reduce the consumption of energy resources - natural gas, electricity and water. But the main thing is that the implementation of large-scale modernization projects will improve the quality and reliability of services for Kyiv residents", - Vitaliy Klitschko emphasized.

Thus, the project, in particular, provides for the installation of new cogeneration units at CHP-6, which in terms of emissions will meet European standards. Inefficient boilers will be reconstructed, which will also reduce greenhouse gas emissions. The project is fully in line with EU policy and the stated climate goals of Ukraine.

It is planned to install a condensing economizer at CHP-5, which will use the residual energy of flue gases (waste heat) to provide heating for the capital's buildings.

The project also envisages the installation of a new monitoring and dispatching system (SCADA). This is the only control and data collection system that will analyze and control the operation of the entire energy complex in real-time and monitor its production indicators.

"I am very pleased with our cooperation with the city of Kyiv. Especially - in the framework of infrastructure modernization projects. As an engineer by profession, I understand that it is almost impossible to modernize such a large energy complex, which is the third-largest in Europe, at the same time. But I am sure that the implementation of the project will significantly improve the quality of services. We will also continue our further cooperation in other projects. "This is the Green City, thanks to which the city is purchasing new public transport and we are ready to support in the construction of a subway to Troieshchyna", - said Matteo Patrone, the Managing Director, Eastern Europe and the Caucasus at the EBRD.

In December 2018, Kyiv signed a Memorandum of Cooperation with the EBRD, the International Finance Corporation and the United States Agency for International Development (USAID). This provided opportunities for the implementation of important infrastructure projects in the capital in the fields of energy and transport. And it was the beginning of international cooperation on large-scale modernization of Kyiv's thermal infrastructure.