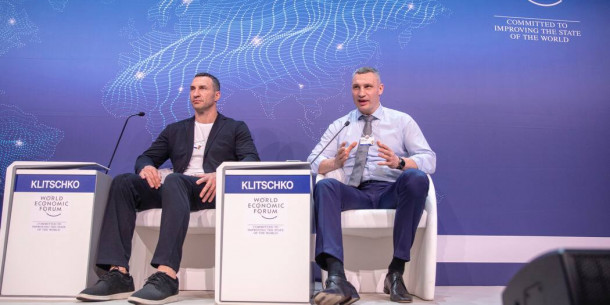 Vitaliy Klitschko took part in the opening of the World Economic Forum in Davos.

Kyiv Mayor Vitaliy Klitschko took part in opening the World Economic Forum in Davos. Also, with his brother, the capital's mayor talked to the forum participants during a discussion in the framework of OpenForum, dedicated to overcoming Ukraine and Kyiv's consequences of russia's large-scale invasion. Vitaliy Klitschko announced this on his Telegram channel.

"Today I took part in opening the World Economic Forum in Davos. One of the main topics of this year's forum is Ukraine. Also, I met and talked at the Davos City Hall with Ukrainian refugees temporarily living in Switzerland. These are mostly women with children from Kyiv and the region, Kharkiv, Dnipropetrovsk region and other regions of Ukraine. They all want to go home. Everyone is interested in when we will win and it will be possible to return to our hometowns," Vitaliy Klitschko said.

He also noted that Ukrainians were interested in what was happening at the World Economic Forum, and what support for our country is being discussed and promised by the leaders of the states and world businesses.

"I emphasized that we understand: that the fate of Ukraine is being decided by Ukrainians who are fighting heroically today for their land and their freedom. But we need the support and assistance of partners. Strengthening sanctions against the russian aggressor and the unity of the civilized world in this matter, without double standards. Increasing the supply of weapons. Russia must feel that it will lose not only its tanks and most of its army because of the war in Ukraine. Russia will remain an exile and bankrupt. We also talked about this with Volodymyr during an OpenForum discussion on overcoming the consequences of Russia's large-scale invasion of Ukraine. In the coming days, we will meet with American and European politicians and big business representatives. We will explain that russia is committing genocide against the Ukrainian people, and attract aid. In particular, for the restoration of Kyiv and Ukraine after the russian barbarians," Vitaliy Klitschko emphasized.