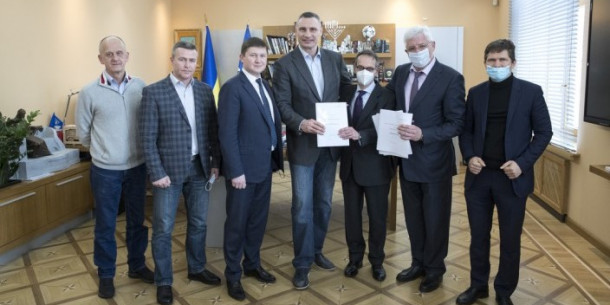 The European Bank for Reconstruction and Development and Municipal Enterprise “Kyivsky Metropolitan” have signed a 50 mln euro loan agreement to finance the procurement of 50 new metro cars. The Kyiv City Council and the EBRD also have signed the necessary guarantee agreement. This was announced by Kyiv Mayor Vitaliy Klitschko following the signing of the relevant agreements.

"We are glad that cooperation with such a reliable partner of Kyiv as the European Bank for Reconstruction and Development continues. And today we are entering a new stage of such cooperation. We are talking about the modernization of the metro car fleet of the “Kyivsky Metropolitan”. With the help of the EBRD loan in the amount of 50 million euros, we will be able to purchase 50 new cars. These are, in fact, 10 trains of the metropolitan subway. Today we are signing a loan agreement between the EBRD and “Kyivsky Metropolitan” and a guarantee agreement between the Kyiv City Council and the EBRD. And I hope that by the end of this year we will sign a contract for the purchase of new cars for the metropolitan subway. Under the terms of the loan, the city will receive an installment payment from the EBRD for 12 years", the Mayor added.

He noted that today the fleet of the metropolitan subway is 800 cars. About 100 of them are in critical condition and need to be renewed in the next 3-4 years. This loan will be used to renew half of the outdated metro car fleet.

"Where will the new cars go? You know that now the city is building two new metro stations to Vynohradar - "Mostytska" and "Prospekt Pravdy". And by the end of the year, we plan to open them. Currently, more than 700 meters have been developed from 1.3 kilometers of an underground tunnel in the direction of the Syretska metro station. A tunnel is also being built between the future Mostytska and Prospekt Pravdy stations. That is why these cars will serve the Syretsko-Pechersk metro line”, Vitaliy Klitschko said.

"We are pleased to be able to support Kyiv in expanding metro services to densely populated and remote areas of the city. Our loan will help more residents of the Ukrainian capital to be able to leave their cars at home in the future and move around the city in comfort”, said Matteo Patrone, EBRD Managing Director for Eastern Europe and the Caucasus.