UA
+38 (044) 2021319
Mon - Fri: 9.00 - 18.00
Main > City News > Kyiv and Tirana signed a Memorandum of Friendship
City News
15
JUL
The Australian government canceled the customs duty on some Ukrainian goods
13
JUL
The government has introduced grant programs to support entrepreneurship and create new jobs
24
JUN
The Kyiv City Council approved the guarantee agreement and the loan agreement with the EBRD
15
JUN
Vitaliy Klitschko: Kyiv is fulfilling its commitments
24
MAY
In Davos, Vitaliy Klitschko spoke about economic aid to Ukraine and Kyiv
23
MAY
Vitaliy Klitschko took part in the opening of the World Economic Forum in Davos.
18
FEB
Deputies of the Kyiv City Council gave permission for the reconstruction of the entrance group of Alexandrivska Hospital
30
DEC
Kyiv rose by 16 points and entered the top 100 smart cities in the world
View all 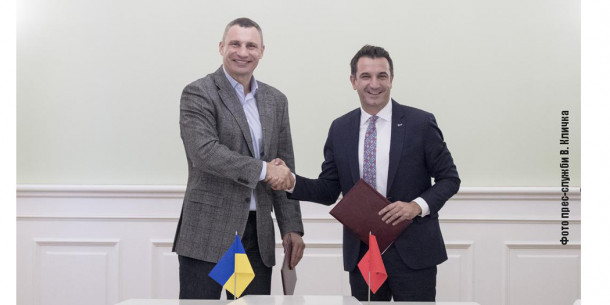 Kyiv and Tirana signed a Memorandum of Friendship

The mayor of Kyiv Vitaliy Klitschko and the mayor of the capital of Albania - Tirana - Erion Veliaj signed a Memorandum on establishing friendly relations between the cities. The signing took place during a meeting in Kyiv, where the parties discussed prospects for cooperation between the two capitals.

"Kyiv and Tirana have a lot in common. Therefore, this memorandum establishes the foundation for more intensive and effective cooperation. Both Kyiv and Tirana have their own experience of positive change, which is interesting and useful. Our task is to bring our cities and countries closer through cooperation", - Vitaliy Klitschko said during the meeting.

A year ago, at the invitation of the Mayor of Tirana, a delegation from Kyiv visited the Albanian capital to study experiences in areas related to the city’s development strategy, public-private partnership projects in the fields of medicine, waste management.

Today, a delegation of the Tirana City Hall arrived in Kyiv to get acquainted with how the Kyiv authorities are implementing reforms in the field of urban planning, transport, culture and sports.

The guests from Tirana visited the objects renovated by the city authorities, which became significant for Kyiv - Natalka Park, Landscape Alley, Volodymyrska Hirka Park, a pedestrian zone near the Arsenalna metro station.

"Our priority is to create a comfortable, safe and environmentally friendly, needs-oriented city of Kyiv. Kyiv nowadays is a city with a low level of unemployment, with the highest wages in Ukraine, the highest social standards, the best schools and hospitals. Of course, we face many challenges every day, but we are working to implement the necessary reforms as quickly and efficiently as possible. We will be happy to share our experience with our partners and adopt the best solutions for the development of the city, implemented by them", - said the mayor of Kyiv.

Erion Veliaj shared his impressions of what he saw in Kyiv.

"Every time I come here, I see how fast the city is changing. It becomes more beautiful, cleaner, more comfortable. And even though both the Ukrainian capital and the whole country live in conditions of constant threat from the northern neighbour. For example, today I visited Natalka Park and was impressed. Despite the cold weather, there were so many people! This is the best evidence that people like transformation. Kyiv is a source of inspiration and an example of positive democratic transformations for many capitals”, - said the Mayor of Tirana.

He also stressed that the residents of Kyiv and Tirana have a lot in common, and the cities themselves face very similar challenges and have the same priorities.

"It's amazing how similar we are! How much we have in common! In particular, the youth of Tirana and Kyiv have so many similar success stories - in politics, in democratic transformations, in art, culture and sports. I invite Kyiv youth to visit Tirana, which will become the European Youth Capital in 2022, and share their achievements. And the signing of the Memorandum on the twinning of our cities allows us to finally start implementing the planned joint projects", - said Erion Veliaj.